JOEHOEEE OUR JEWELRY IS SPOTTED!
Very proud, one year after the establishment of our jewelry brand, we are already found by major magazines.
Thus, we were featured in BRIDE, Kek Mama, we young parents, parents of now, Mama and so, ALSO, Yoga, Party, Tipped Mourning, and yes, even in the third generation MAX bracelets!
Below is a selection of cutting where we stood in.
Journalists, thank you very much for your support!

Tales production CHILDREN (January 2014)
There was a shopping ... with all sorts of fairytale stuff.
The editors of CHILDREN knew watching it! Prinsessesarmbandje of KAYA
Nice spot among other beautiful girls brands.

Parents of today (December 2013)
The editors of Parents now sought the Sparkling Star jewelery set from their competition.
25 What readers will bear with their daughter at Christmas rays at that ;)

Children (October 2013)
The jewelery set "Infinity Luxury 'including a few freshwater pearls participated in Winactie CHILDREN.
Lots of readers have responded, and 25 of these are now walking proudly along their mini-mi same bracelet!

Parents of now (September 2013)
The magazine's parents now asked if we wanted to participate in the annual giveaway action!
Of course we want our mother-daughter jewelry sets fit beautifully into the magazine for hip parents.
Nice detail: the hands of myself and my son Daan 4 who also wanted to help with a photo shoot once ;)

Mini Brides in Bridal Magazine (May 2013)
A nice piece in the most widely read wedding magazine in the Netherlands!
"Little bridesmaids often feel a mini bride.
Strengthen that feeling by making them wear "matching accessories

Leeuwarden Courant (May 2013)
The mother and daughter bracelets in the spotlight in Leeuwarden!

We Young Parents (May 2013)
So sweet! Especially for Mother's Tanja Rakhou this Mom & Me bracelets designed.
With glittering crystals, AAA quality pearls.
My daughter (3 months) will be the key to mom's heart, how sweet is that! 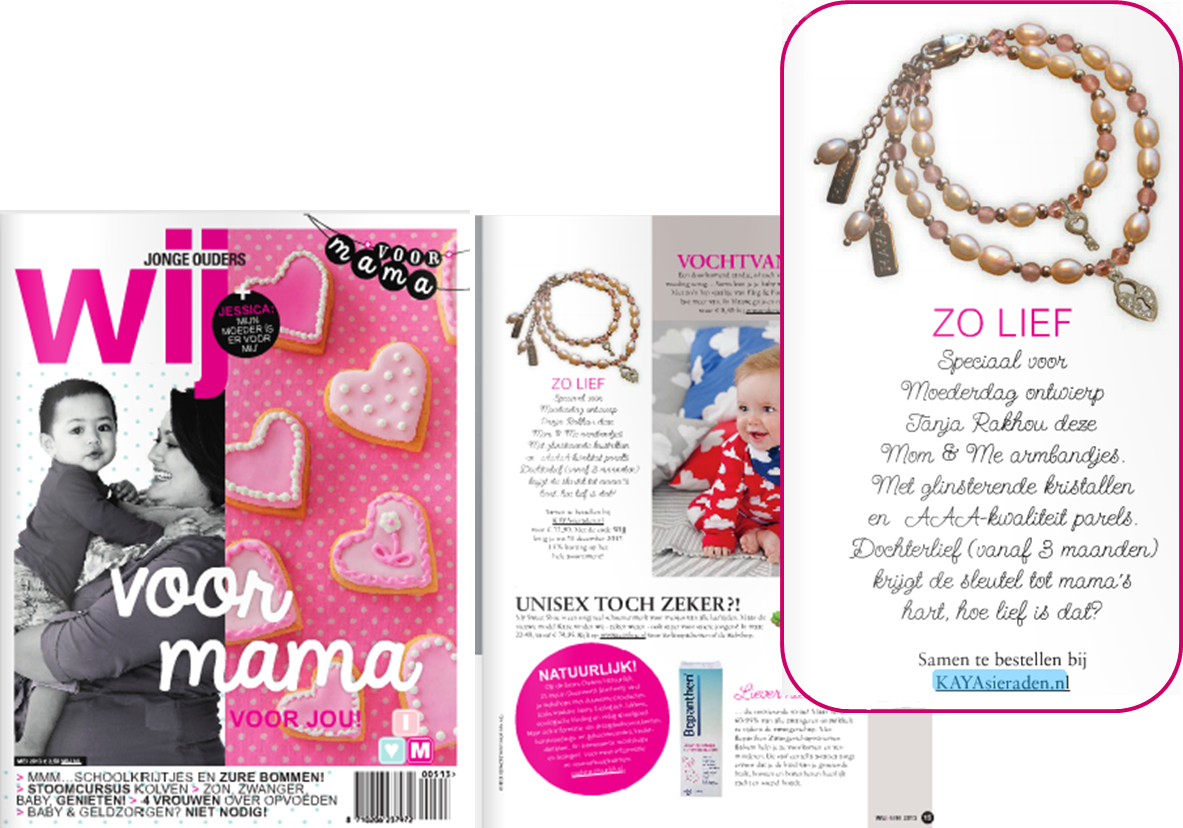 Mama and her mini-me in Greater Growing (November 2012)
Growing Bigger was a big fan of Mom & Me Key to my Heart necklaces.
A nice little spot in the middle of the blade from top to bottom {} was the result!

Our lucky charms spotted
Maartje Verhoeven asked if she could shoot for the new Yoga Magazine a few. Buddha necklaces Of course you can! Enclosed beautiful story Maartje wrote about our Buddha jewelry .